VOTE: Whereas, the former PS 64, also known as Charas-El Bohio, located at 605 E. 9th Street, is a beloved community building that has served the Lower East Side since it was built more than a hundred years ago; and

Whereas, for nearly 70 years it was a public school serving as both an educational and cultural center for immigrants first from eastern and southern Europe and then from Latin America; and

Whereas, in the mid-1970’s after New York City closed the school, community activists and artists took over the building to create a vibrant community center where local non-profit organizations and artists of all kinds could thrive; and

Whereas, over vehement community opposition Mayor Giuliani in 1999 sold the former PS 64 to a developer who then evicted the community center; and

Whereas, after an unprecedented community campaign, in 2006 the NYC Landmarks Preservation Commission designated the Former PS 64 as a landmark recognizing both its physical and cultural distinction; and

Whereas, the developer who acquired the building from the city, and is now proposing to convert it to student housing, has shown gross negligence in the maintenance of the building, has been antagonistic toward the community, and completely unwilling to work constructively toward a solution to the impasse over the future of the building; and

Whereas, the current proposal for student housing does not meet the NYC Department of Buildings’ criteria for a dormitory under the community facility definition in the zoning ordinance because there is no long term lease for all of the facility with one or more accredited educational institution nor is there a restrictive declaration that the building will only be used as a dormitory;

Now therefore, Community Board 3 very strongly opposes the current proposal for conversion of the Former PS 64 to student housing;

And further, Community Board 3 strongly favors a proposal that would result in the building becoming a genuine community facility and cultural center consistent with the building’s history in our neighborhood.

The battle to reclaim old P.S. 64/ Charas for the East Village community continues. On Tuesday afternoon, the Landmarks Commission will vote on a series of changes to old P.S. 64/Charas/El Bohio. Approval from the LPC is required to move forward the owner’s plan for a 500-bed dormitory. We demand a better plan for old P.S. 64, one that serves the community.

LPC will consider alterations to the front and and back courtyards, windows, and the roof.
Review the drawings. Delivery your testimony to the commissioners on Tuesday afternoon or submit written testimony to comments@lpc.nyc.gov. Read our sample letter.

Plan for community use at former P.S. 64/ Charas 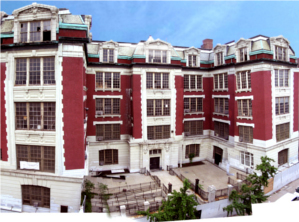 The Department of Buildings is currently reviewing an application to convert former P.S. 64/ Charas into a 500-bed dormitory. The Cooper Union has entered into an agreement with the developer to take a portion of the building for student housing. We reject the proposal to use P.S 64 as a dorm.

COMMUNITY USE – NOT DORMS

Sign on to demand that the building be returned to the community!

Return PS64 to the Community

Old P.S. 64, a designated New York City landmark, has a long and valued

history serving our community. This building could easily serve our

community again. Dormitory use of this building does not serve our

community. Cooper Union should not house  students in old P.S. 64.

We ask that old P.S. 64 be returned to use for our community.

Have photos of the building from the past twenty years? Email director.evccnyc@gmail.com to add them to our archive. Include the month, year, and name of photographer.

Read more about the history of P.S. 64 and our work to protect the building.


The Landmarks Preservation Commission voted on October 9th to create the East Village/ Lower East Side Historic District. Effective immediately, the new district will help protect many cultural resources, religious structures, and contiguous streetscapes that define our historic neighborhood. A comprehensive district had been long overdue in the East Village; previously, our only districts included the block-long East 10th Street Historic District (2012) and the St. Mark’s Historic District (1969, 1984).

Thanks to the local and state elected officials, community groups, community board, and individual residents for their unwavering support. And we thank you for your attention throughout this long process. The commission’s responsiveness resulted from the urgency shown through your commitment, contributions, and testimony.

We celebrate the overwhelmingly positive remarks from most commissioners during the vote, but our work is not complete. The Landmarks Preservation Commission unexpectedly removed properties along First Avenue from the proposed map prior to the vote. After years of advocacy and organizing, the district must be upheld in its entirety by the City Council. EVCC will work with Councilmember Rosie Mendez and other community organizations to be certain we promote each of the 300+ structures designated by LPC. Your support today will help us protect the newborn district and aid preservation efforts in other portions of the East Village.

Send your testimony to LPC by Monday, May 6th by mail or to comments@lpc.nyc.gov.

Dear Chair Tierney:
I urge you reject the application at former P.S. 64 located at 605 East 9th Street. The building’s significance is embodied architecturally as a premier example of the school designs of architect CBJ Snyder and is deepened by a century-long history as a resource for our community.

Many of the alterations under review are inappropriate to the historic character of the building. The bulkheads are visible from many angles, most prominently from the west along the north side of Tompkins Square Park. As proposed, they will detract from the cohesive roofline, an important and surviving component of the original design.

The interior spaces and historic courtyards at old P.S. 64 provided open space to a neighborhood with a serious need for such space. For the past 11 years, the community has been locked out of a now vacant and decaying structure. The new gates planned along 9th Street will officially close off the courtyard that had historically been accessible.

The façade and future use of the building at this important neighborhood building must comply with its historical intent. Please deny this application out of respect for the social and architectural history at old P.S. 64.

The City’s Landmarks Preservation Commission (LPC) unanimously approved the East 10th Street Historic District on January 17th. This is only the second historic district in our community and the first since the St. Mark’s Historic District passed in 1969.

We would like to thank City Councilmember Rosie Mendez for her help in establishing this district and her ongoing work to protect our neighborhood’s architectural integrity. We would also like to thank Senator Daniel Squadron, Assemblymember Brian Kavanagh, and Borough President Scott M. Stringer for testifying in support of this district, and Community Board 3 for passing a resolution in support. Finally, we would like to thank our neighbors and neighborhood preservation organizations for their help.

Our work is not done. The LPC has yet to schedule a hearing for the proposed Lower East Side/East Village Historic District. This district will protect nearly 300 buildings from inappropriate alteration and/or demolition. Please email the LPC to urge them to set a date right away!

The EVCC has advocated for years for landmarks protection of the LES/East Village. In July, Community Board 3 voted to support the two proposed historic districts in our neighborhood. Historic Districts preserve architectural character and protect neighborhoods from inappropriate alteration, demolition, and out-of-scale development. The next step is a hearing at the Landmarks Preservation Commission (LPC). We will alert you when LPC sets a date for the hearing. UPDATE: The East 10th Street Historic District was designated by LPC on January 17th. LPC has set June 26, 2012 as the hearing date for the proposed LES/East Village Historic District. 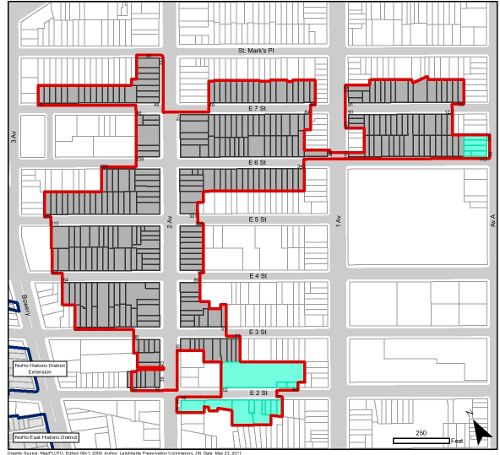 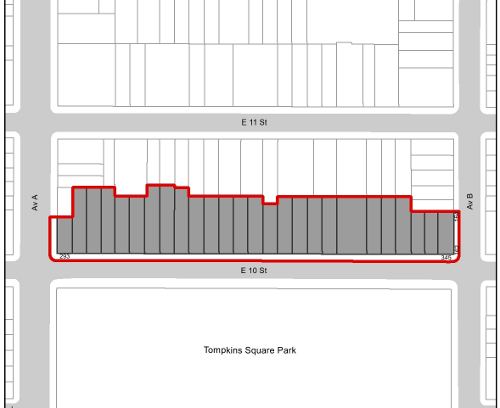 The Landmarks Preservation Commission (LPC) released plans for two historic districts in our neighborhood. The districts being considered are Tompkins Square North (E 10th Street between Avenue A & Avenue B) and E 2nd Street to E 7th Street between Bowery and Avenue A. 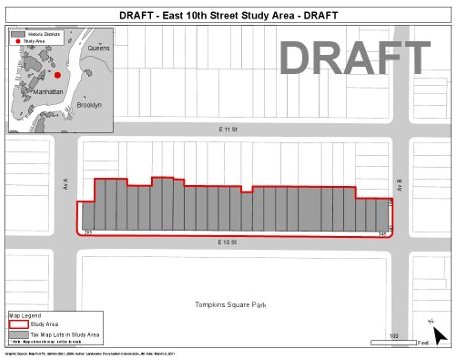 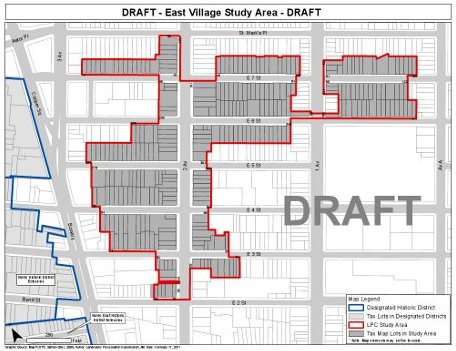 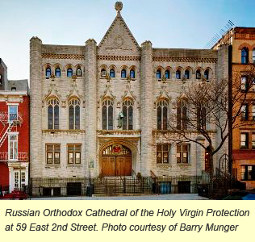 We need your support in asking the Landmarks Preservation Commission (LPC) to designate the Russian Orthodox Cathedral, at 59-63 East 2nd Street, as a Landmark.  The LPC held a hearing in March for landmark designation but did not take a vote at the hearing.

The Cathedral was constructed in 1891, designed by the reknowned architect Josiah Cleveland Cady, who later designed the Metropolitan Opera House and the auditorium of the American Museum of Natural History.  The Cathedral fits as an historic whole with the already-landmarked Marble Cemetery across East 2nd Street.  Neighborhood support is necessary in encouraging Community Board 3 and the Landmarks Preservation Commission towards designating the Cathedral as a Landmark.  As a first step, PLEASE sign our online petition and please include your name and address in the comments section.

PLEASE ATTEND AND TESTIFY IN SUPPORT OF LANDMARK DESIGNATION FOR THIS HISTORIC STRUCTURE!

In 2008 EVCC became aware of plans to erect an eight-story condo tower atop the Russian Orthodox Cathedral at 59 E 2nd Street in our neighborhood.  Thankfully that threat is gone, due in large part to the rezoning of the East Village which prohibits such construction.  But, the 150-year-old building remains vulnerable – THIS IS WHY WE NEED YOUR SUPPORT AT THE LANDMARKS PRESERVATION COMMITTEE (LPC) MEETING!

On Tuesday, March 23 the LPC will hold a hearing on a proposal to landmark the structure.  EVCC, along with the Greenwich Village Society for Historic Preservation, urged this designation in a letterto the LPC in 2008.

Please email director.evccnyc@gmail.com if you plan to attend!