Since receiving the Landmarks Preservation Commission’s blessing in 2013, Gregg Singer may finally be moving forward with restoration work at former P.S. 64/ CHARAS – El Bohio. The landmarked school building has been vacant following the eviction of the former tenants of El Bohio led by CHARAS in 2001. The City reversed its short-lived approval for plans to convert the building into a multi-school “dormitory” this past September.

The project’s future is uncertain, but the exterior work may begin soon. The owner got the okay from Landmarks more than a year ago to perform restorative work to replace damaged architectural details and to install new windows. Two permits from the Department of Buildings issued in January allow for repairs to the dormers, mansard roof, roofing, and the facade. LPC also supported alterations to carve along the edges of the raised courtyards to create windows at ground level for dorm rooms. It does not appear that the permits issued allow for this component of the work.

While the permits are dated 2015, the owner set the start date for the work in August, prior to the project’s approval and subsequent Stop Work Order. The DOB maintains its objections to the dormitory plan, which Singer will need to resolve before moving forward with any interior work. We support the City’s objections to the project as presented and maintain that a dormitory is an improper use for the site.

Old P.S 64 has endured several major weather events while unsealed including Hurricane Irene and Superstorm Sandy. The condition of the building is not entirely due to wear-and-tear; at the time of landmarks designation, many architectural details suffered damage by the workers. Facade and architectural restoration work is welcome if it will protect this historic neighborhood gem. We will watch to see if, after years of decay, some restorative work begins here. 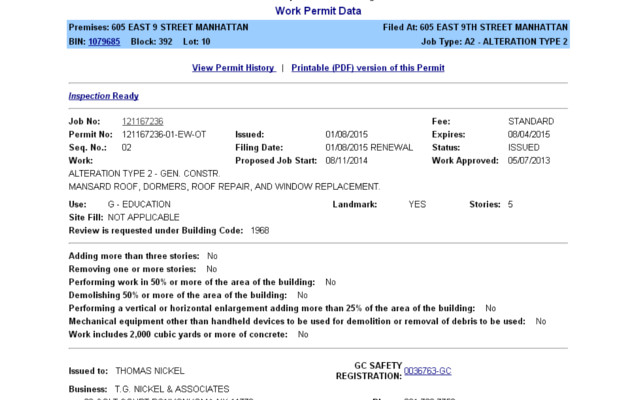 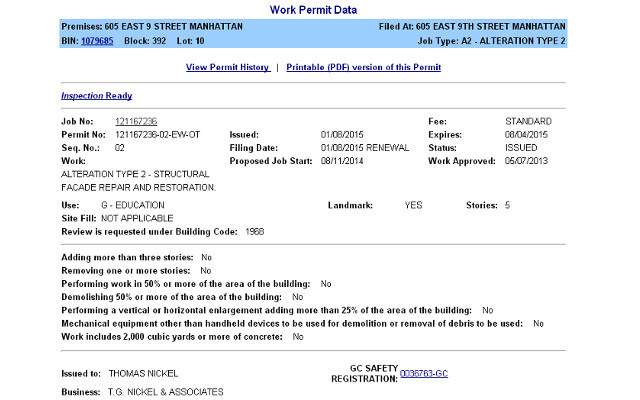